There was an error retrieving images from Instagram. An attempt will be remade in a few minutes.

James and I are huge fans of the BBC television show Top Gear and having watched the Vietnam special back in 2008, we were excited to realise how incredibly easy it is to hire a motorbike ourselves and ride along the famous Hai Van Pass which featured in the show. This coastal, mountain road is renowned as being one of the most beautiful in Vietnam and I would not hesitate to agree. Many travel agents and hostels now offer a tour called The Top Gear Experience which enables you to hire a motorbike or scooter and drive it one way between Hoi An and Hue. We booked our trip through Vietnam Backpacker Hostels and the tour included free delivery of our big backpack to our destination (you can do the tour in either direction), a selection of detailed maps and a list of useful Vietnamese phrases just in case we get lost or break down. The Hai Van Pass only covers approximately 21km of the almost 150km journey but it is definitely worth the trip.

We tagged along with Ben, an Aussie and Monique, an American we had met in our hostel (Dk‘s House, Hoi An). They had decided to rent a motorbike together and kindly accepted our request to join them. We set off around 9am on our semi-automatic motorbike and met Ben and Monique at a small petrol station where they were filling up their automatic scooter. We were advised by our hostel that an automatic scooter would struggle getting up some of the mountain roads with two people on the back and so we opted for the semi-automatic. Looking back now, Ben and Monique’s scooter was actually a lot quicker than our motorbike and so if you are going to make the trip, I would recommend you just rent what ever option you feel most comfortable driving. To be honest, what ever option you decide to go with, its going to be pretty old and in a minor state of disrepair. A lot of the backpackers we spoke to who had already done the trip told us how they had gotten a flat tyre or their horn stopped working halfway through the journey. We were fortunate enough to avoid having any mechanical issues with either bike. 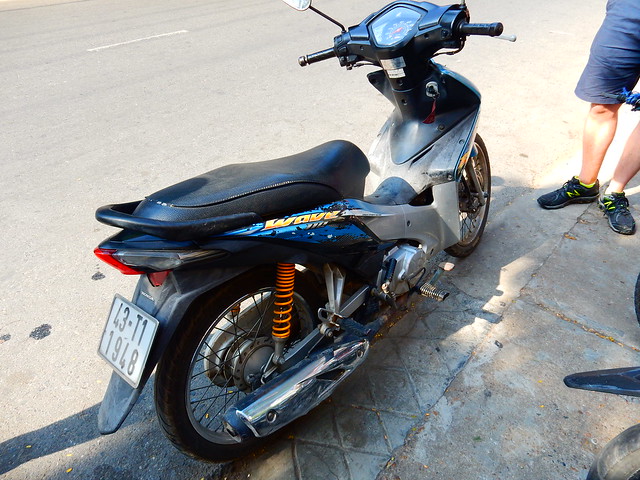 The roads in Vietnam are CRAZY. There are so many motorbikes and scooters on the roads with the odd truck, coach and taxi that it makes travelling by road a thrilling yet terrifying experience. With my motorbike crash in Dalat still fresh in my mind, I must admit I was absolutely terrified for the whole 8 hours it took us to get from Hoi An to Hue. If you drive non-stop you can get there in around 4 hours but we stopped several times for food, drinks and a refreshing swim at Elephant Springs Waterfall. 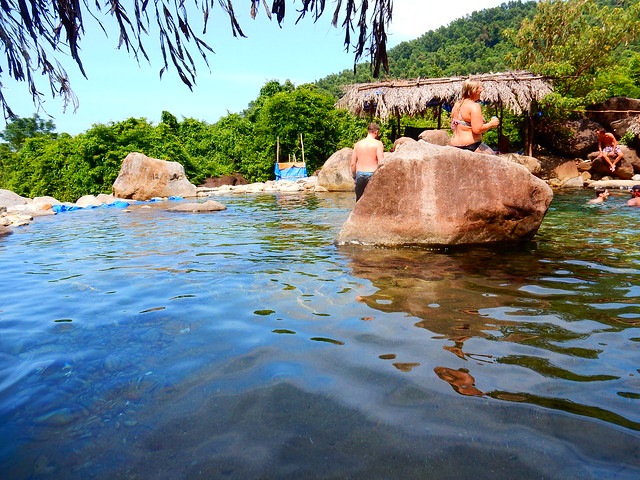 The Hai Van Pass is definitely the highlight of the trip although the scenery along the majority of the route is absolutely stunning as well. Once you have driven out of the cities of Hoi An and Da Nang, you hit an amazingly beautiful coastal road that meanders up onto the Hai Van Pass. With every corner you turn on the mountain road, the view of the coastline just gets better and better. The beaches are incredibly clean, the water so calm and inviting and the mountains a vibrant green. We stopped for a drink after around 15 minutes and literally walked straight into the arms of the crazy Vietnamese lady who owned the roadside café. After each being greeted with a hug we were able to take in the view, which was breathtaking. There was a large rock behind the café which the guys immediately jumped onto to seize a great photo opportunity. 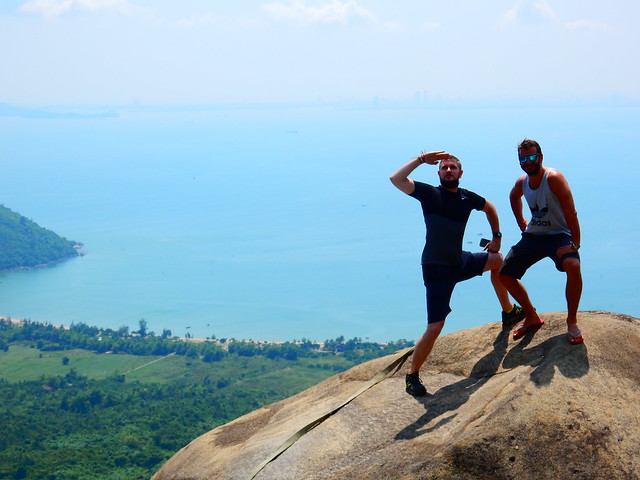 As we tucked into our drinks and used the loo with a view, four more women appeared out of nowhere and tried to sell us bracelets and other jewellery. When that failed they moved on to asking us for coins from our own countries. All of the women we met at that café were actually really charismatic and cheeky but unfortunately we didn’t have any coins to give them and so continued our journey meandering up and down the mountain road. Once we had completed the Hai Van Pass, we continued into another town where we stopped for lunch at a beach side restaurant. After some chicken noodle soup and a coconut we pressed on to find the Elephant Springs Waterfall. Entrance costs VND 10,000pp and you also need to pay VND 2,000 per motorbike. Once we had parked our bikes we had to walk uphill for around 10 minutes to reach the top pool of the waterfall. I have never seen such clear water in all my life. The sun was shinning, the water glistening and view was spectacular. It actually looked like a 5* hotel’s swimming pool. After cooling off we headed back down to the restaurant where we had parked our bikes to top up on water when we were introduced to some puppies that were only a few days only. We had just enough time to squeeze in a quick cuddle and then we were on our way again. 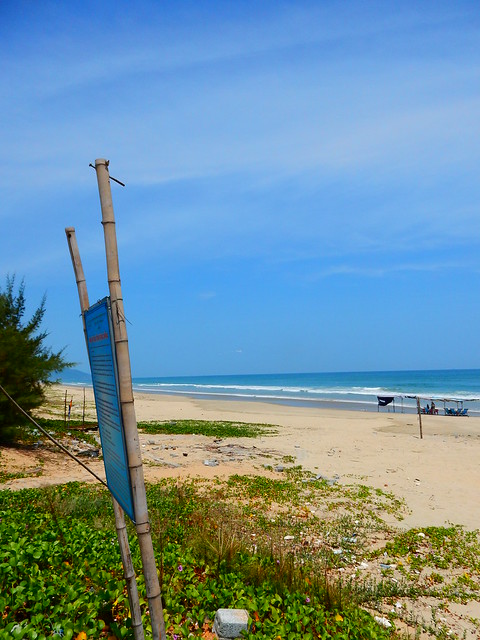 Once we were back on the road we came into contact with many more large trucks and at one point we were even sandwiched between a coach and the biggest lorry I have ever seen. We we travelling at some speed, making hairpin turns down the narrow mountain road, listening to the lorry behind pulling his horn at us to move out the way. Ben and Monique had managed to over take the coach in front of us but we remained stuck between these two huge vehicles which left us feeling (well, me feeling) like at any point the lorries brakes failed, we would be brown bread. I was literally screaming at James to pull over but we managed to get to a straightener section of road where the lorry over took us. Not long after that we turned onto a single track road which took us along a slightly longer route to Hue but meant that we could avoid the busy main road. 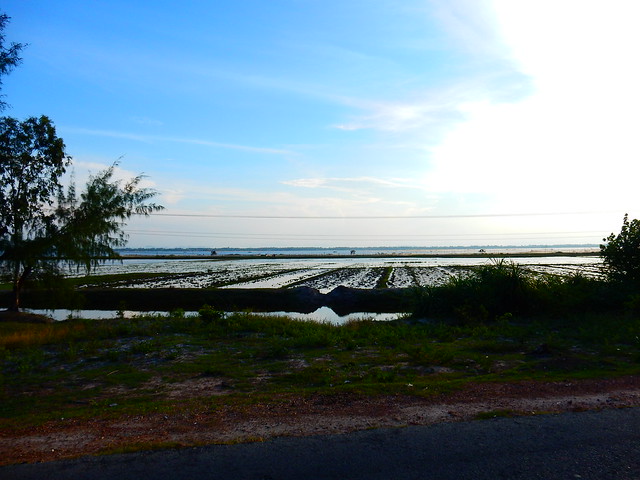 We passed through a number of small villages with large sections of stunning, flat countryside between them. We successfully avoided crashing into a number of buffaloes which would randomly appear in the middle of the road as well as a number of school children who just walk into the road without looking. As we neared our final destination, we hit rush hour and as we crossed a large bridge into the centre of Hue, I could do nothing but hold on for dear life as we dodged the hundreds of bikes on the road until we finally made it to our hostel. I can not tell you how relieved I was that we had made it to Hue without getting lost, breaking down or having an accident. People do exactly the same journey we did on a daily basis without incurring any issues but I think I was still just so nervous to be on the roads since my accident, that I even celebrated with my first alcoholic drink in two weeks.

As an overall experience the journey was really amazing. Its beautiful, quiet (for the most part) and a very liberating experience (unless you’re me and you are terrified the whole way but able to appreciate the beauty).

View all posts by tortugatravel

One thought on “Vietnam: Top Gear Experience – Hoi An to Hue”